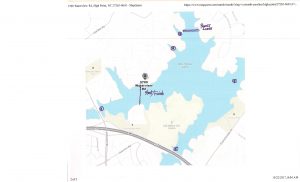 On Saturday, October 28, 2017, OHSC will hold its 1st Annual (?) Gunkhole Regatta. As previously emailed, this is meant to be a fun and more social type of opportunity for us to sail without the formality and normal rules of a regular-season regatta.

Details are attached with rules and a map showing the start/finish line and five marks that must be rounded (in whatever order you choose) in order to complete the regatta.

Oak Hollow Sailing Club is holding its final regular season regatta this Saturday, October 21, with the Captains’ Meeting set for 10:30 a.m.  All participating boats should be rigged prior to the meeting.

The weather will be beautiful and the wind forecast for Saturday, has been gradually improving each day. We have a close race in the YTD points standings in the mono-hull class (see attachment for standings) and this will be the final event that will count toward those standings.

Carl Simmons, Mark Benham, Mike Vitamvas, and John Whiting are signed up for Race Committee – thanks guys! Please be at the marina no later than 9 a.m. for RC duties.

At the Captains’ Meeting we will talk about next Saturday’s “Gunkhole” Regatta and Picnic (October 28), which will be a very “social type” event with only as much competition as each captain and crew wants there to be. Also, this Saturday we will begin accepting money and reservations for our annual banquet on November 18 (more details will be sent out tomorrow regarding the banquet).

Hope to see you this Saturday and next!

Oak Hollow Sailing Club held its September 2017 Regatta on Saturday, September 16th, with 34 members and guests present (including four of our HPU sailing students). Thank you to all who brought morning snacks (the Duffy’s, the Malcolms, the Starkeys, Sue, Paul, and Pam – and any others I may have missed). Thanks to Pam for cleaning up the shelter after the meeting, as we had to vacate it earlier than normal.  Thank you again very much to Bruce and Sally Leigh for arriving early and dodging the “traffic” to get our RC boats launched. Thank you to Sue Cole and Mike Vitamvas for assisting with our HPU students at the City Marina prior to the Captains’ Meeting.

Tom Kirkman filled in on short notice to assist with Race Committee, as we had two volunteers that did not show up. Tom, Phil Andrews, and Gary Gooden set the course in one of the few areas we had some periodic wind, and therefore we were able to complete three races. Thank you guys for your service!

Although the wind was light and sporadic, it was a beautiful day with 16 boats participating in at least one of the three races.

Congratulations to mono-hull race winners Michael Nordahl who won the first two races and to Sue Cole who won Race 3 outright, even without the handicap scoring. Sue finished 8 minutes ahead of the second place boat with handicap scoring.  Way to go, Sue!  The day’s total scoring was unbelievably tight, as Sue Cole and Michael Nordahl tied with 21 points, and Dan Schuee was one point behind with his two second place finishes and one third place.

In the mulit-hulls, congratulations to Roger Bates for 2 first place finishes and one second place, and to Warren Mitchell for winning the first race. Special recognition to Mike Vitamvas for two third place finishes in the multi-hulls, with his two young granddaughters as crew on his Hobie 17.

We are proud of our four HPU students who participated in the first two races – Jack, Justin, Kristen, and Sarah, light (and sporadic) wind sailing is a real challenge, and all four of you did well!  Thank you for sailing with Oak Hollow Sailing Club!

Handicap scoring and the Results with points are HERE. 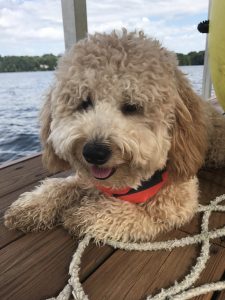 On Saturday, August 19, OHSC held its August 2017 Regatta with 31 members present. We had a beautiful, but warm day, with 9 boats participating.  The wind picked up in time for the Race Committee to start and complete three races, with the final race run as a two-lap event.

Special thanks to Bruce (and Sally) Leigh for arriving VERY early to launch the pontoon boat and the safety boat (and also for retrieving them at day’s end), and to Sally for bringing refreshments. Also thanks to Pam Lineberry and Paul for refreshments, coffee, ice and water, and to Jerry and Gene Eldred who brought the apparel for sale.

Thank you to our Race Committee members headed by PRO Mike Mullins, with Allison Mullins, Mike Nordahl, and Dan Schuee.

Congratulations to Gary Gooden who won all three races in the mono-hull class (great to get you back out on the water, Gary!), and to Dave Heap and Alex for two second place finishes. Race winners were spread out nicely in the multi-hull class, with Roger Bates and Pam, Warren Mitchell, and Chris Malcolm and Mary each winning a race. Good sailing ladies and gentlemen.